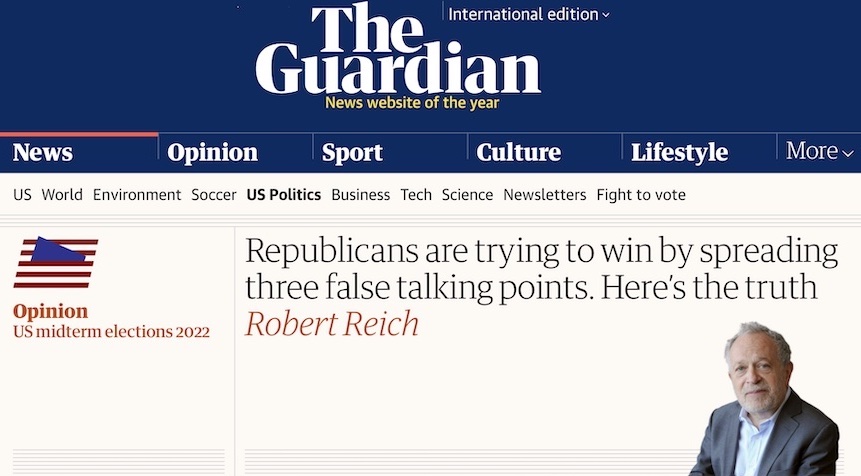 I recently came across an excellent example of a numbered list.

It was a political column published in, of all places, The Guardian online newspaper.

It’s clearly not a white paper. For one thing, it’s only 700 words long. And it’s an opinion piece in a newspaper, not a piece of B2B content. 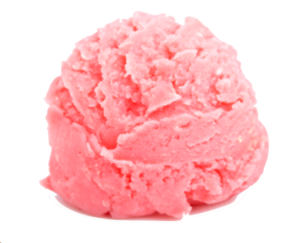 But it’s still a fabulous showcase for how to handle this format right.

You may not agree with former U.S. secretary of labor, now college professor Robert Reich, an ardent Democrat.

If the politics in this piece rankle, ask yourself, “How would I argue back?”

As for our purposes, we are looking at how he structured this piece, not the content.

And on that basis, I think it’s well worth studying.

Here’s where you can find it: https://www.theguardian.com/us-news/commentisfree/2022/oct/16/republican-talking-points-midterms-robert-reich

And if that link gets broken, you can download a PDF here.

Let’s start with an overview

This table shows all the key elements of a numbered list, and whether this column includes them.

So you can see that this column covers all the basics of a numbered list/strawberry flavored document.

Notes on the title

I imagine The Guardian editorial style guide prevented the title from starting with an Arabic number like this:

3 false talking points Republicans are spreading to win the midterms

That might work better for a strawberry white paper you want to pop in a list of search results. See this quick tip about using Arabic numerals in titles. 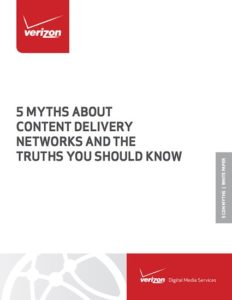 I’ve written white papers that were analogous to this, with titles like:

7 Myths about [Whatever] and the Truths You Should Know

That’s a powerful title, since nobody wants to be take in by a “myth” or a “lie.”

This approach can be effective for a white paper… especially a smaller company trying to undermine a larger competitor.

Now let’s consider each of Reich’s main points. He phrased them like so:

1. They claim that crime is rising because Democrats have been “soft” on crime.

2. They claim that inflation is due to Biden’s spending, and wage increases.

3. They say Democrats voted to hire an army of IRS agents who will audit and harass the middle class.

Notice how each claim is expressed in a similar way: “They claim” or “They say…”

Immediately after each claim, he skewers it with a single word: Rubbish. Baloney. Nonsense.

I find that very effective. It’s like saying, “Enough!” and sweeping everything off a desk with one arm.

To me, that’s a powerful way to start a rebuttal.

And notice how Reich sums up each section by saying, “Let’s be clear…”

This is a deliberate use of repetition for rhetorical impact.

It’s interesting to see how he uses this conclusion. After listing his proofs in a more objective voice, he uses “Let’s be clear” to swoop in and say what he really thinks.

In fact, in each section he accuses Republicans of lying. Them’s fighting words!

Where are the proof points?

But Reich doesn’t stop at calling these talking points trash. He offers lots of facts and logic to out-argue them.

Let’s look at the sheer scope of his evidence:

So that’s 10 links to further evidence in a single column, far more than most political columns ever bother to include.

The middle section could have used a few more counter-proofs to bulk up the evidence there. But that section does rest on some pretty solid logic.

How is the logic?

This element impressed me most about this column. It’s very well-argued and it makes a lot of sense.

So let’s look at how Reich does it. 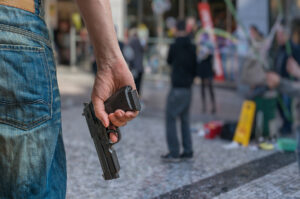 Talking point #1: Crime is rising because Democrats have been “soft” on crime

Every American has heard this one. It’s sticky, because no one wants to be menaced by thieves or murderers who know they will get off lightly.

His conclusion: “Let’s be clear: It’s been Republican policies that have made it easier for people to get and carry guns. Republicans are lying about the real cause of rising crime to protect their patrons—gun manufacturers.”

By marshalling many facts and connecting the dots, I think Reich has demolished this claim. What do you think? 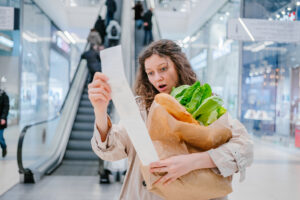 Talking point #2: They claim that inflation is due to Biden’s spending, and wage increases

Many families are struggling to buy groceries, pay the bills, and gas up their cars.

As with crime numbers going up, Reich can’t deny this is happening. He has to explain why that’s happening in a different way to take the heat off Biden.

Here are some things causing inflation, he says, that have nothing to do with the president:

Then he follows up with a counter-story to the Republican argument: Inflation is happening all over the world, not just in the U.S.

Besides, the U.S. pandemic spending started before Biden was president.

So it’s not Biden’s spending that is causing inflation.

And it’s not wages rising. Inflation is rising even faster. That’s why most workers are feeling hard-pressed.

No, inflation is rising because greedy companies are raising their prices to generate the highest profits in 50 years!

His conclusion: “Let’s be clear: The biggest domestic cause of inflation is corporate power. Republicans are lying about this to protect their big corporate patrons.”

Reich sets the issue in a global frame, pinpoints some key factors, and casts a lot of doubt on this Republican talking point. 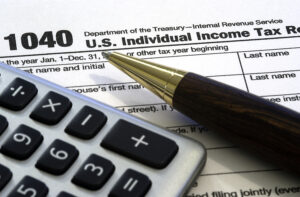 Talking point #3: They say Democrats voted to hire an army of IRS agents who will audit and harass the middle class

Nobody wants to be harassed by the taxman, so this is a powerful claim put forward by the Republicans.

Here are the facts Reich advances to counter it:

His conclusion: “Let’s be clear: The IRS needs extra resources to go after rich tax cheats. Republicans are lying about what the IRS will do with the new funding to protect their ultra-wealthy patrons.”

So here’s the real story, according to Reich:

In just 700 words, Reich demolishes three cherished talking points that politicians are trying to use to gain people’s votes. But what makes this piece powerful is its structure and repetition.

I’d love to see a rebuttal from a Republican perspective. But I think that would be  difficult to manage.

What do you think? Is this an effective numbered list?

Want to hear whenever there’s a fresh article on this site? Subscribe here to stay in the know on long-form content. From time to time, we’ll also send you word about some great new resource or training. And you can unsubscribe at any time.

Posted in Getting Started, White Paper Writing
← Recommended books on white papers (and everything else)Tools of the trade →