Every white paper writer must learn how to build a coherent argument.

Without one, your white papers won’t convince anyone of anything.

But a white paper that presents a strong argument can be right on the money. It can generate great results for years running.

The question is, what makes a good argument? And how do you build one?

For answers, let’s look back. Way back. To ancient Greece and the great thinker Aristotle, shown on the coin above.

Believe it or not, Aristotle can give us some practical tips on how to build a good argument in a white paper.

Here are 6 tips, plus a real-life example from a white paper I worked on.

More than 2,300 years ago, Aristotle analyzed the elements of persuasion. To help do this, he studied the orators in the Greek Senate and the popular dramas of his time.

What he found is very powerful. His analysis can still help writers to create white papers today.

For best results, these three elements must be used in the proper proportion, with not too much but not too little of each one.

Note: To find out more, Google “Aristotle elements of persuasion” and you’ll turn up a wealth of information.

Build an argument tip #2: Use each element in proper proportion

And there’s a wrinkle. Logos encompasses two different aspects: facts and logic. So you must handle your 80% logos properly to keep it in balance.

If you use all evidence with no logic, your white paper won’t connect the dots.

A barrage of facts can be overwhelming.

You need a thread of logic to carry your argument from point A to point B.

On the other hand, if you argue every point logically, but without evidence, your white paper will seem superficial and unpersuasive.

Like you couldn’t be bothered to do your research.

Logic without evidence is just opinion.

This can invite counter-arguments from opinionated naysayers or competing vendors.

Build an argument tip #3: Don’t rely too much on your  authority (ethos)

Ethos comes from the credibility of a speaker, based mainly on their profession or experience and somewhat by the quality of their evidence.

For example, on a medical topic, a doctor has instant credibility. A professional soccer player, not so much.

But a doctor talking about the World Cup is simply giving his opinion. On the World Cup, a soccer player has more credibility than a doctor.

You may agree or not, but they don’t have much ethos to stand on.

This can happen with white papers from industry-leading companies. These companies can get used to everyone else watching what they do and copying them.

So when they publish a white paper, they’re tempted to say, “Here’s a better way to solve some problem… and this is true because we say so!”

Without digging up any proof, they’re just relying on their authority in the market.

And a white paper that uses facts and logic from a smaller player can steal sales from the big guy who gets lazy that way.

Build an argument tip #4: Don’t rely too much on calls to emotion (pathos)

Sales copy is all about a promise or a dream. So it’s heavy on pathos: emotions like fear, greed, pride, or vanity plus explicit calls to the reader’s self-interest.

But white papers are different.

You want to use pathos like whipped cream on top of a pie, not the whole filling.

Just a hint of pathos at the start or end of a white paper can often suggest a higher vision, elevate your argument, and gain more engagement and buy-in.

But if you continuously resort to pathos, your white paper will sound fluffy and unrooted, more like a sales pitch than a white paper.

This is why the number #1 failing of too many white papers is too much selling.

I often say a white paper writer should “think like a lawyer.” But what does that really mean?

Simply put, you must assemble a mountain of evidence that proves your case beyond any reasonable doubt.

Just like in a trial, the best evidence includes:

The more credible, mainstream, and reliable your sources, the better.

For example, government reports, industry associations, analysts who track your sector, and respected trade journals are all good sources.

Joe Schmoo’s blog? Not so much.

But evidence alone is not enough.

Remember: Every good trial lawyer knows how to connect the dots along the trail of evidence by touching on legal precedents and accepted ideas. And they work hard to boil down their argument to reasonable-sounding logic (logos).

And then for a stirring conclusion, the best trial lawyers ratchet up the calls to emotion (pathos) to wring tears out of the jury’s eyes.

Build an argument tip #6: If you don’t have all three elements, be wily

This chestnut has been tossed around legal circles for more than 100 years:

This maps nicely onto using Aristotle’s three elements to build a white paper.

To build an effective argument, a white paper writer should proceed as follows:

Tip: If you can’t pull together enough evidence and logic to make a strong argument in a white paper, consider writing a shorter document that relies more on pathos, like a sales sheet.

I worked on a white paper about surgical site infections (SSIs): infections a patient can get after an operation. 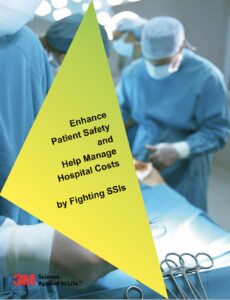 Here’s how we used Aristotle’s three elements of persuasion in this paper.

Ethos: To build this element, the paper is signed by a credentialed nurse whose bio is included in a section “About the Author.”

Plus, the cover shows an OR team doing an operation. This suggests, “We know what you do” and even, “We’re with you.”

Both these items build the credibility of the paper’s author and publisher.

Evidence (logos): This white paper cites more than 60 journal articles in the special format used by the American Medical Association.

Since the target readers are surgeons and nurses who read medical journals, the white paper follows the same evidence-based approach they are used to.

While this evidence builds the case, this approach also builds more ethos.

Logic (logos): Although the white paper provides a mountain of evidence, we made sure to build a logical pathway through it.

Our storyline was that SSIs endanger patients and waste money… but that many infections could be prevented by investing just a little more time, attention, and money. Then patients would be healthier and the hospital would save money.

It’s a reasonable argument, supported by facts and expert opinion. And it introduces the thought that hospitals should invest in new technology to reduce SSIs.

That’s using logic to pull together the evidence into a persuasive argument.

Pathos: There are passionate calls to self-interest in this white paper, too.

Imagine: Your patients could die. Your reputation and the good name of your team and your institution could be damaged. Your hospital could lose millions of dollars from prospective patients who go elsewhere.

These dire warnings are sprinkled throughout.

But you can’t give readers all bad news. After hearing about a big problem, people yearn for a solution.

The white paper ends with some upbeat pathos, using phrases like, “Deliberately aiming to reduce SSIs can pay off handsomely” and, “That’s a win-win in the war on germs!”

To sum up, the key to building an effective argument in a white paper is to follow this process:

When you do all that, your white paper will make Aristotle—and your client—very proud!

See tip #3 in this series on why you must plan every white paper, including a link to a free presentation.

Do you use Aristotle’s three elements of persuasion in your white papers? Do you have any more tips to share? Please leave your comments below.