Out of all 300+ white papers I’ve worked on, a few stand out in my recollections.

This is the story of four of those projects, and what we can learn from them.

There’s nothing magical or heroic about these stories.

What makes them memorable is that each project faced a different challenge:

Overcoming each of those challenges took some special steps grounded in a rather old-school quality.

Let’s talk over each project and see what we can learn from it.

In 1997, I was VP of Marketing for a fast-growing tech company in Montreal.

We’d seen white papers from other companies and we wanted our own for an upcoming trade show.

We just had a few little problems.

Lack of time: The trade show was only two weeks away… we didn’t know any better.

Lack of experience: Nobody in the company had ever worked on a white paper before.

And in those early days of the web, I couldn’t find any advice about white papers online. So we just had to make it up as we went along.

Lack of English proficiency: Our head developers were all francophones.

While they spoke excellent English, they couldn’t properly review a white paper written in English on such a pressing deadline.

Despite all of this, we had a burning desire to do a white paper for that trade show.

So I hired a seasoned English writer and a talented designer. I signed on as the editor to put it all together.

And we fell into a crazy routine:

For those reviews, the company founders, top developers, the writer, and I all squeezed into a tiny windowless office.

I remember we could barely fit in enough chairs and the air got pretty stuffy by the end of our sessions.

To get past any language issues, the writer read the draft out loud.

During the read-through, we would stop to explain any phrasing that anyone found hard to understand.

More often than not, we could find a simpler way to express the same thought.

Then the writer and I would ask probing questions on the next section.

After 60 or 90 minutes of intense discussion, the latest draft would be more or less approved.

This went on for two full work weeks.

And the day our team left for the trade show, I handed them a disk they could use to print out some copies when they landed.

How did that white paper turn out? 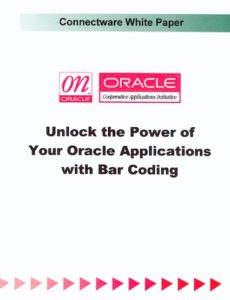 To me, it ended up looking something like a slide deck, e-book, and tipsheet all rolled into one.

But it was better than most white papers circulating 25 years ago.

And it paid off big for our company: our team had the most credible white paper at the trade show.

All in all, that white paper:

Not bad for a rush job!

Just don’t tell anyone you can deliver a white paper in two weeks.

I’ve never managed to repeat that feat, ever.

But that one time, the commitment of a whole team overcame all of our challenges, including our impossible deadline. 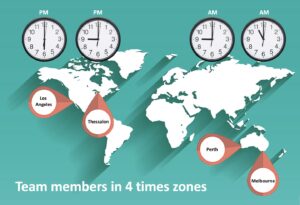 Location doesn’t matter when a team is flexible

My first tale was about a time crunch.

This one is about a spatial challenge: a team scattered all over the world.

Few white papers are written with everyone in the same room. Most often, I never meet my client or SMEs in person.

These days, we have Zoom to bring us all together. But when this paper was done back in 2010, affordable video calls were still a few years in the future.

Challenge: A team scattered all over the world

I wrote this white paper for a company based in Australia seeking a foothold in the American market.

The team included people from all over the world:

And this was in 2010, so we were stuck with voice-only conference calls.

Help to get reports in on time

But many construction firms struggled to send in reports on their mega-projects by the deadline.

If you didn’t send in your report in the government’s format by the deadline, you could miss out on millions of dollars in funding.

So a lot of money and careers depended on getting these reports done efficiently.

My client proposed an online portal to help firms manage all their documents and generate more timely reports.

Get up early or stay up late

With people in four different time zones around the world, setting up conference calls for the white paper was challenging.

To get everyone on the same call, somebody had to be up early or take a call late at night.

But with a little give-and-take, we managed to take turns and schedule calls that worked for everyone. 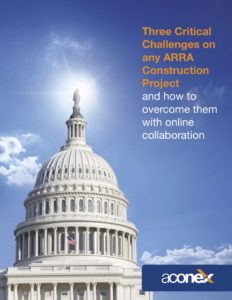 The white paper broke the problem into three parts.

Then we figured out how the client’s online portal would solve each problem.

All the text came together in a classic numbered list + problem/solution.

The design and graphics enhanced the text beautifully.

And the final paper reads, I think, like we were all in the same office somewhere in the U.S.

With a little flexibility, our team worked smoothly

Over the years, I’ve written white papers for clients from Silicon Valley to Switzerland, from Finland to India.

And today, thanks to Zoom and Microsoft Teams, we can talk and see one another’s faces for next-to-no cost.

While that tech helps tie together far-flung teams, so does the flexibility to accept a little inconvenience for the sake of your team members and the project. 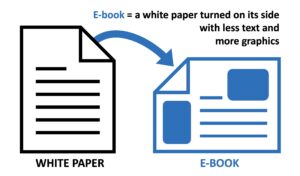 Saving an e-book from a terrible design

To me, an e-book is basically a white paper turned on its side with less text and more graphics.

Maybe that’s not a great definition—but I know an e-book when I see one!

One client wanted an e-book to give a quick primer on their market space and point to many other pieces of content.

So I wrote a 25-page draft with not a wasted word.

Several pages linked to the comedy videos the company had produced.

My favorite was “Suitemates” about two enterprise software CEOs who end up in prison: a powerful satire on the competition.

Another was “Married to the Job” about a couple working in different sides of a company: a work-oriented sitcom.

Overall, that project had everything going for it: A strong sponsor, a good process, committed reviewers, and enough budget to do a proper job. 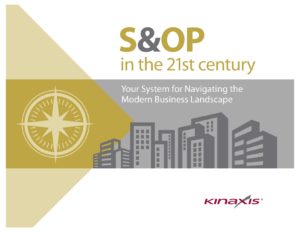 But that e-book almost didn’t make it

The challenge: The design looked bland, old-fashioned, and hard to read.

No one liked it.

And no one thought it would engage any prospects and accomplish its goals.

Yikes! If we’d stopped there, this e-book would have been “challenged” or perhaps abandoned altogether.

But my client kept going.

She asked people specifically what they thought and pondered what to do.

And then, instead of rushing that e-book out the door, she over-rode the deadline and sent the e-book back for a re-design with careful instructions.

The second time, the look was right.

The color scheme is warmer. There are subtle flourishes like a compass motif, triangular bullets, and little comic-tragic masks.

All these design elements add up to an inviting read. Don’t you think?

What made the difference between success and failure?

When my client saw the first version wasn’t working, she took some extra time to finish the project properly.

In an era when many marketers are driven by the iron deadlines of their editorial calendars, that took guts.

But it ultimately paid off in a successful project.

Revisions are smooth when a client values quality 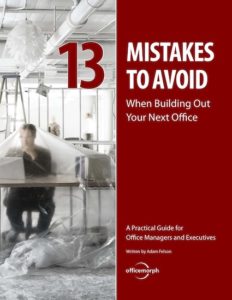 Most writers won’t touch a half-finished white paper. They want to start all over again from scratch.

But I worked for years as an editor for books, newspapers, and newsletters, so I don’t mind revising a client’s draft white paper.

That said, there’s a big difference between revising and writing from scratch.

With most white papers, the client and SMEs comment on the writer’s work.

But when you do revisions, the shoe is on the other foot: The client may have to deal with big changes to their draft.

And it doesn’t matter whether that draft was written by them personally, by someone else in-house, or by an outside writer they hired. If the client gets defensive about their draft, they’re headed for trouble.

Trouble with a capital T, and that rhymes with P and that stands for Poor Performance. As in few downloads, low conversions, and little impact.

The client wrote the first draft

So in this case, the client was a firm in San Francisco that helped companies manage their office renovations.

Owner Adam Felson had written a first draft: an excellent listicle that covered 13 problems he often saw in office renovations.

But his draft was too long. It was packed with so many tips, the text ran 6,000+ words. That’s just too long for busy people.

I suggested an edit to save words and make the text a little easier to read.

With judicious editing, I trimmed 1,300 words without losing any of his key ideas.

Even though I cut more than 20% of Adam’s original draft, he took it all in stride and never complained.

He could appreciate seeing his draft becoming even more professional.

Next, we turned to our go-to designer, Oliver Sutherns, for the page design.

Oliver found some great photos, picked up the dark red of the company’s logo for subheads and flourishes, and created airy and scannable pages.

The client was delighted with the revisions

The client chose top creative suppliers and then trusted us to do our best work.

“Really great work on this!” said Adam, “I just wanted to say that you are incredible at what you do.”

His colleague Ali Platto added, “I am drop-jawed, this is so fantastic.”

With an ideal combination of the right team, the right process, and the right resources, this project was smooth from start to finish.

That white paper paid off, too.

Adam won some new business, generated some great press, and gained enough interest to put together a successful breakfast event.

And that was all thanks to his appreciation for quality… and his ability to let go and let his chosen creatives do their jobs.

So there we have it: four white papers that worked out.

The following table sums up these four tales.

As you can see, there’s nothing especially complicated here.

In fact, we can boil down every project to one essential, rather old-school trait: commitment, flexibility, patience, or trust.

Those are winning qualities that will help you complete a white paper or any other project. So let’s all try to bring these qualities to our next projects.

Quick Tip: My favourite way to polish a draft

Read it out loud. That quickly reveals any awkward phrases or run-on sentences. To me,... 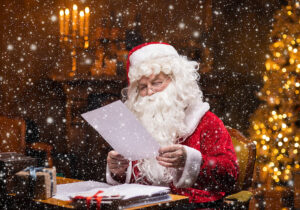 White papers and… letters to Santa?!

Do you know anyone writing a letter to Santa? I always urge my kids to...